I have never watched Duck Dynasty, nor do I ever care to.  Part of it is that I do not like to watch much television, part of it is that I am not a fan of reality TV, and the final part is that I do not like the pure commercialization of Duck Dynasty paraphernalia.  But I have to offer great praise for the 'Duck Commander' Phil Robertson for his interview with GQ magazine and not forgetting about his faith.  Of course, as you may know, A&E indefinitely suspended Phil for some of his comments reported in the article.  Of particular commentary fame is this quote from the article:

For the wrath of God is revealed from heaven against all ungodliness and unrighteousness of men who suppress the truth in unrighteousness, because that which is known about God is evident within them; for God made it evident to them. For since the creation of the world His invisible attributes, His eternal power and divine nature, have been clearly seen, being understood through what has been made, so that they are without excuse. For even though they knew God, they did not honor Him as God or give thanks, but they became futile in their speculations, and their foolish heart was darkened. Professing to be wise, they became fools, and exchanged the glory of the incorruptible God for an image in the form of corruptible man and of birds and four-footed animals and crawling creatures.Therefore God gave them over in the lusts of their hearts to impurity, so that their bodies would be dishonored among them. For they exchanged the truth of God for a lie, and worshiped and served the creature rather than the Creator, who is blessed forever. Amen. For this reason God gave them over to degrading passions; for their women exchanged the natural function for that which is unnatural,and in the same way also the men abandoned the natural function of the woman and burned in their desire toward one another, men with men committing indecent acts and receiving in their own persons the due penalty of their error (Romans 1:18-27)

The Bible itself does not hate the homosexual community, either, but it does call what they do a sin. Now, when all of the commentators of the article in GQ were quick to jump on the hate-bandwagon, I believe that they did not do their journalistic due diligence, because they also seemed to forget about this quote from that same article:

“We never, ever judge someone on who’s going to heaven, hell. That’s the Almighty’s job. We just love ’em, give ’em the good news about Jesus—whether they’re homosexuals, drunks, terrorists. We let God sort ’em out later, you see what I’m saying?”

The heart behind this statement is not hate. So let us shift gears here.  The real reason for this article was a commentary I watched on The Kelly File recently.  Bernard Whitman said:

Bernard is defining Christianity with some soft, feel-good social agenda that does not fit the pattern of Scripture.  The Bible is not about hating people or their lifestyles.  It is about obeying God, so let me help you out with this conflict:  When an action requires us to choose between a relationship or a word in the Bible, we must always always side with the doctrine.  Jesus does not tell people to love the woman brought to her in sin.  He tells her to go, and sin no more (John 8:11).  This is a common practice in the Scriptures.  Jesus also says that loving Him means to obey his commands (John 14:15).  Jesus also says:

“Not everyone who says to Me, ‘Lord, Lord,’ will enter the kingdom of heaven, but he who does the will of My Father who is in heaven will enter. Many will say to Me on that day, ‘Lord, Lord, did we not prophesy in Your name, and in Your name cast out demons, and in Your name perform many miracles?’ And then I will declare to them, ‘I never knew you; depart from Me, you who practice lawlessness (Matthew 7:21-23).’

So, all this being said, what does the Bible actually say about homosexual behavior? First, the Bible does not ever advocate hatred of anyone.  And frankly, I am sick of being labeled as a homophobe or of being intolerant for saying what the Bible says.  Starting with the verse that Phil actually referenced (1 Corinthians 6:9-10), the Bible lists a group of sins that are not consistent with Christian living.  Note that these are for people that profess to be Christians, not for the unbelieving world.  Homosexuals lies in this list, but is not specifically called out.  As I mentioned above, it does not start with homosexuality, but just that is one of the sins mentioned.  A similar verse occurs in 1 Timothy 1:8-11.  This is not a new principle.  Moses covered this in the Levitical law as well.  The whole of chapter 18 covers various sexual sins.  The specific verse about homosexuality reads:

You shall not lie with a male as one lies with a female; it is an abomination (Verse 22).

The overall point is that the Bible is clear about homosexuality as a sin.  Some argue that it is on the same par with other sexual sins.  Some people elevate it higher.  I will leave that discussion for another time.  But my chief point here is that we, as Christians, are commanded to follow the Bible.  If the Bible calls it a sin, we need to excise it from our life!  We are also to love all other people (that is a command, too).  What happened here is that someone shared his view, and he has a legal right to do that in this country.  If A&E does not like it, that is their prerogative as well.  The Duck family may need to look for an alternative station to continue broadcasting.  And that is fine. As for me, I have more respect for Phil because he did not compromise his faith.  As for my views of Bernard, I think that he needs to re-examine what he believes about Christianity.  Christ is in no way ever about just blindly loving people and letting them do what they feel.  Our hearts are indeed desperately wicked and can deceive us.  Love is truly important in the Christian faith.  But sorry, Bernard, Doctrine trumps love in every instance where they are in conflict in the Scriptures. 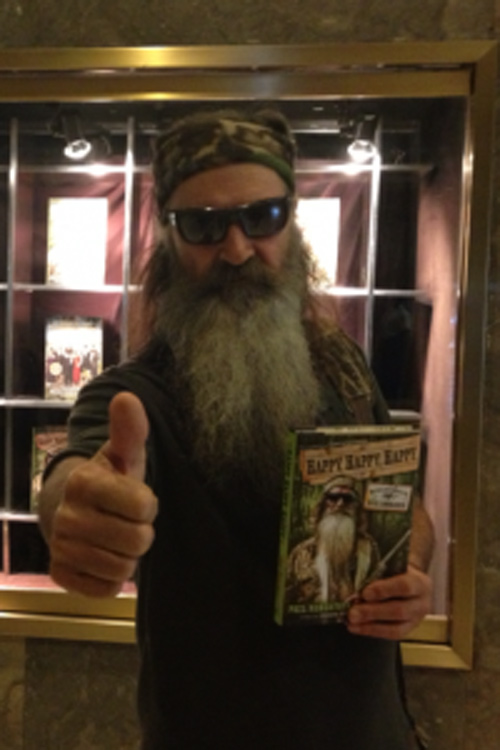