The Struggle Leads to Strength

First, a little history: This is one of the books that was examined closely during the reformation. Martin Luther initially did not consider it canon because of the emphasis on works. Some people, however, fail to realize that after careful study, it was indeed scripture. John Calvin always considered it inspired, as do we today. What all those works-laden passages mean will be examined when we get to those.

James 1:1: James, a bond-servant of God and of the Lord Jesus Christ, To the twelve tribes who are dispersed abroad: Greetings.

Verse 1 is a salutation explaining that the book is to the Jewish people that are scattered around the known world. Not much else to be had (except that a few cults think that the Jewish nation is ‘lost’, that is not the case).

James 1:2-4: Consider it all joy, my brethren, when you encounter various trials, knowing that the testing of your faith produces endurance. And let endurance have its perfect result, so that you may be perfect and complete, lacking in nothing.

Problems will occur in this life. Living through these problems produce endurance and a faith in God like no other. Like our physical bodies gain strength when we exercise and our minds get sharper as we study, our faith gets stronger as we endure challenges around us. Once we struggle through a specific problem, it gets easier to tackle others. Just as living the life of sin gets easier with each sin, living in a life of enduring faith gets easier as well.

What kind of problems will challenge our faith? Many kinds. Here are just a few:

My first real experience with this type of problem came when I was rather young. On May 31, 1985, a series of severe storms blew across the state of Pennsylvania. We had just moved a few months earlier from Reno, NV, and I asked my aunt if there are tornadoes around here. She said “No”, just to comfort the ears of a little child, but those words were eaten when one of the largest tornado storms hit the state!

I remember leaving the house the next day and seeing all the debris that clearly came from houses. I was not yet old enough to comprehend it, but I was in the midst of tragedy.

We don’t have to look too hard to see other natural disasters about us, especially since the southern part of our country was just hit hard by Katrina. Hurricanes, tornadoes, earthquakes, floods, droughts, volcanoes. They all hit, but it is how the Christian preserves in all this that makes the difference.

When such a disaster strikes, the Christian seeks solace in the arms of God, knowing that He is still in control. With that support, he can reach out to other people who do not know this love. This leads to the opportunity to share the love and Gospel of Jesus Christ. All this is easier said than done, but surviving such a tragedy gives you a powerful strength when coupled to the grace of our Lord.

Sins of Past Generations

Coming from a dysfunctional home, I can write volumes on this one topic alone. If you are not there, you will not understand as well as one who is there. This is one of the hardest things to overcome. The question lingers on the hearts and minds of millions of people who are in this situation: How can a loving God place me in a such a wreck as this home? Before I give you the answer, let me give you a brief picture of my family struggles. My childhood was not as bad as it could have been, but it certainly was not good. We fled Reno from my step-father who was a ‘less than perfect’ example at that time. We lived at a relative’s house for a few months before we rented our own house. My mother worked a lot to pay the bills, so we were alone a lot. I picked up the habit of stealing, eventually getting caught and serving some community service. My mother called me a (profanity) thief, the people at the fire house where I put in my hours treated me like a second rate human being, if even that. After that, I decided to dump those friends I was in with and get some new ones, who were into drugs. I never did the drugs, but I was peer pressured by more people than you could imagine. I thought that they were stupid to take, but I found out when I was 14, that my mother was doing some minor drugs, too. I went totally inside myself. My mother married again which caused numerous problems. My life was threatened a few times, but my mother always said “He is only talking, he won’t do anything”. He attacked me when I was 18 and I fled for a few weeks, I almost killed myself, but reasoned that it wasn’t worth it. I would finish my degree in college and disappear into the sunset. How did this happen? There are at least6 generations of alcoholics on one side of the family and at least 3 on the other side. My mother had a lot of problems which were passed on to myself and my brother, but they were not entirely (I repeat ENTIRELY) her fault, she was simply doing what she had learned. I broke the cycle, recognized the problems, and corrected them. That is a tiny fraction of my story, I hope you get the idea.

The answer that I promised above is this: God places people in such situations to make you strong. That is what He did to me. I came to know Jesus Christ and had to sort out all the things of my past. It was very hard, but it was necessary for God to do His work in me. Because I preserved through that trial, I have been made strong in Christ.

In conclusion, when you find yourself in the middle of a problem, pray to God. Ask for endurance, patience, perseverance, knowing that it will make you a stronger Christian in the end. 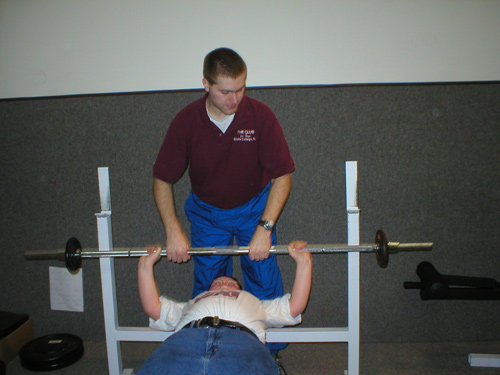