The Fruit of Love

When I was a young man and not devoted to God, I had an intense hatred for all the world.  I did not merely dislike the world, nor was I passively disinterested.  Hate is a strong feeling, but it is the word that best describes my attitude toward people that I was forced to see in my daily living.  The hurt that I experienced growing up finally manifested itself as general despise for anyone around me.  All this changed when Jesus Christ saved my soul, and deep within my heart a seed germinated and that seed was the fruit of the spirit.

The original language of the fruit of the spirit listed in Galatians 6 indicates that we are not identifying nine separate fruits but rather, one single fruit that manifests itself in nine different ways.  Just like we can look at an orange and see an outer peel which is very bitter to the taste, that does not make up the whole of the orange.  We can then take out that orange outer layer to expose a pith inside that is still bitter, not generally eaten, but clearly distinct from the peel.  Next we find segments of fleshy fruit inside of a thick skin, and inside those packages will often be seeds.  This is the fruit of the spirit; each attribute of the orange is marked by different characteristics, but each is still the same fruit.

When I started to notice that change in me, I was also reminded that just as fruit grows on a vine, I did not do anything to make this fruit grow other than cultivate soil for the fruit.  God gives the plants the root to grow and I provide a fertile soil by learning what God says through the Word and in communication through prayer.  In 1 Corinthians, Paul reminds his readers that:

I planted, Apollos watered, but God was causing the growth (1 Corinthians 3:6).

For the fruit to grow, we must be attached to the vine:

Abide in Me, and I in you. As the branch cannot bear fruit of itself unless it abides in the vine, so neither can you unless you abide in Me. I am the vine, you are the branches; he who abides in Me and I in him, he bears much fruit, for apart from Me you can do nothing (John 15:4-5).

Once we are followers of Christ we can start to produce fruit.  In the context of the fruit of the spirit, Paul lists love first.  Love is a core part of the Christian walk, though in the English language it can be easily misunderstood, mostly because we have one word for love while the ancient Greek language lists four words and they ranged from sexual love to sacrificial love.  The most common Greek word for the Christian life is the word 'Agape' which is the deep sacrificial love.  This is not lust or duty, but rather, a deep desire to truly see other people get the best for themselves at our general expense.  This sacrificial love was not even on my radar as a young man but very early in my Christian walk it began to manifest itself.

Once I became a believer, I observed a shift in my attitude toward other people.  I went directly into a mode of love that caused me to share the Gospel with a man who took many attempts to deeply harm me.  I felt as though the childhood betrayal that plagued my early life faded into obscurity as the true meaning of what Jesus did for me overwhelmed my senses.  I once made a poor line server at the restaurant cry over blueberry muffins and within a few months of salvation, I was actually caring for the people on staff around me.  Indeed, my personal experience with Love is truly amazing, but it only grew deeper from then on.

It is no surprise to me that love manifested itself so deeply in my life once I read the Scriptures.  Jesus was asked which is the greatest command.  He gave the first and the second most important commandments, and central to both of those commands was love:

Ultimately, the law found in the Old Testament was not a rule book designed to keep the people separate for the sake being separate.  It was not because God is a control freak and wanted people to blindly live by a set of capricious rules.  The law was because God loved His people and wanted them to understand their inner capacity for sin but instead to always be focused on the love for each other rather than always getting what they could.  This is why the corners of the field were not to be harvested: that the widows and travels could gather some food.  The law specified 'an eye for an eye' not to teach revenge, but to get people to think about how they would feel should the harm they wanted to subject others to come back on themselves.  Love was the center of purpose of the law, and the prophets were all pointed to Jesus who would be the way the human race can achieve love.

In our daily lives, love helps us through because we can learn the age-old truth that it is more blessed to give than to receive.  Not only do people greatly benefit when we give to them, but we also greatly benefit from the love we pass on to others ourselves.  When love is a character trait of our life, the other manifestations of fruit are not far behind.  We shall consider those next week. 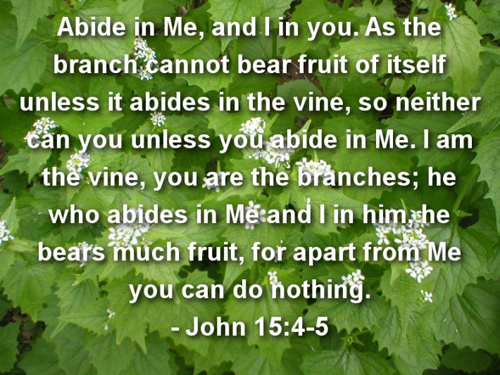