Truth is best defined as "fidelity to a standard" meaning that something is true if it matches the object that it is defined by.  God commanded the Israelites to have honest measures to weigh out quantities of foods for payment or sacrifice.

He commanded the weights to be exactly as said they were and not false weights used to defraud people (Deuteronomy 25:13-16).  Just like Israelites going to a market to weigh out the proper amount of grain, we should always test ourselves against the standard measure of God.  I was reminded of this at the soup kitchen last week when I suspected the thermometer was displaying an incorrect reading.  I went into our drawer to grab the thermometer that we usually use and behold, we had two temperature readings.  Being a trained chemist, I quickly set a pot of water on the stove and cranked up the heat to get a boiling standard and I also put a pitcher of ice water in the cooler to get a freezing standard.  I put both thermometers in the boiling water to check the temperature and then in the freezing water.  I was deceived!  The thermometer I had thought was correct was actually the one giving us wrong readings.  We were deceived by an incorrect thermometer but the only way were would have known our temperatures were off was by using known values to check the fidelity of the thermometer. In terms of a soup kitchen, the wrong temperature could make the difference between killing bad bacteria or not, but failing to use a proper standard in our eternal soul is even more critical.  One group of people will come to Jesus with the false standard of works believing they are saved, but they will be wrong.  Jesus says in Matthew 7:21-23:

Not everyone who says to Me, "Lord, Lord," will enter the kingdom of heaven, but he who does the will of My Father who is in heaven will enter. Many will say to Me on that day, "Lord, Lord, did we not prophesy in Your name, and in Your name cast out demons, and in Your name perform many miracles?" And then I will declare to them, "I never knew you; depart from Me, you who practice lawlessness."

Many people believe that they will be welcomed into the outstretched arms of Jesus only to be turned away into the outer darkness.  They believed they were following God in doing good works.  They were like this man trying to cast out demons:

But also some of the Jewish exorcists, who went from place to place, attempted to name over those who had the evil spirits the name of the Lord Jesus, saying, “I adjure you by Jesus whom Paul preaches.” Seven sons of one Sceva, a Jewish chief priest, were doing this. And the evil spirit answered and said to them, “I recognize Jesus, and I know about Paul, but who are you?” And the man, in whom was the evil spirit, leaped on them and subdued all of them and overpowered them, so that they fled out of that house naked and wounded (Acts 19:13-16).

Let us not be those people, let us be people who truly follow God as He revealed himself to be through the words of the Bible.

Once we start to suggest that a Christian should be living a certain way, many churchgoers will start to condemn us with the ultimate evil label: Legalist!  Let's be clear right now on what legalism is and what legalism is not.  Legalism is not calling people to live as the Bible clearly teaches.  On the contrary, legalism is calling people to live by principles that are not found in the Bible.  The Pharisees were not legalistic because they were telling people to live by God, they were legalistic because they were adding to the law that God had provided.  As such, legalism crosses paths with gray-area decisions. A gray area decision is a life-choice that depends on the conscience such as eating meat in a Pagan city.  As Paul describes, it has likely been sacrificed to an idol, but an idol is just stone.  In that case, if your conscience lets you eat it, and you do not cause your brother to doubt the faith, than you are free to eat it (Romans 14:13-23). When we start to command someone to live by a gray-area decision such as eating meat or not setting aside a sabbath day (Romans 14:5-6), we are now starting to be legalist.  These are matters of the conscience, not commands in the scriptures.  To contrast this, the Bible says:

Let no unwholesome word proceed from your mouth, but only such a word as is good for edification according to the need of the moment, so that it will give grace to those who hear (Ephesians 4:29).

This is not a casual suggestion but a command that is a challenge to our fallen sinful nature.  It is not legalism to teach about this command from the Bible and to exhort people to live by it.  This is one example of gray-area decisions and one of a direct imperative command that we as Christians should heed.  I cannot take the time here to discuss in more detail, but Grace to You discusses gray-area decisions and the Bible is full of instructions on how we must live.

We need to stop screaming Legalism at every hint of scripture that contrasts our sinful behavior and understand that God did call us out to set aside our futile minds.  This means that we as the church actually need to live differently than the culture around us.  We need to stop trying to make the church 'relevant' and instead make it a beacon of light to show the way to God and a pillar of salt to preserve the world.  But when the church looks like the world, a person who hits rock bottom living in this world will look up and see the church behaving perilously close to the culture that nearly killed them.  The church will not look different, it will not look like a place to go to be saved.  It will not look like a place with the answers. Rather than imitating the culture, Paul calls as to walk no longer as the Gentiles walk (Ephesians 4:17).  We should instead be transformed, and he gives us those principles as well:

Therefore I urge you, brethren, by the mercies of God, to present your bodies a living and holy sacrifice, acceptable to God, which is your spiritual service of worship. And do not be conformed to this world, but be transformed by the renewing of your mind, so that you may prove what the will of God is, that which is good and acceptable and perfect (Romans 12:1-2).

Notice that we are transformed by the renewing of our minds.  This renewing is from bathing our minds in scripture, which is the way that God has given us to know Him, and thus, the Bible is the ultimate standard by which every Christian should strive to live by.  I leave you with this: just as my thermometer was determined to be out of line with the standard by testing it, we should daily examine our life by the standard of God's word so we are not deceived.  James writes this:

But everyone must be quick to hear, slow to speak and slow to anger; for the anger of man does not achieve the righteousness of God. Therefore, putting aside all filthiness and all that remains of wickedness, in humility receive the word implanted, which is able to save your souls. But prove yourselves doers of the word, and not merely hearers who delude themselves. For if anyone is a hearer of the word and not a doer, he is like a man who looks at his natural face in a mirror; for once he has looked at himself and gone away, he has immediately forgotten what kind of person he was. But one who looks intently at the perfect law, the law of liberty, and abides by it, not having become a forgetful hearer but an effectual doer, this man will be blessed in what he does (James 1:19-25). 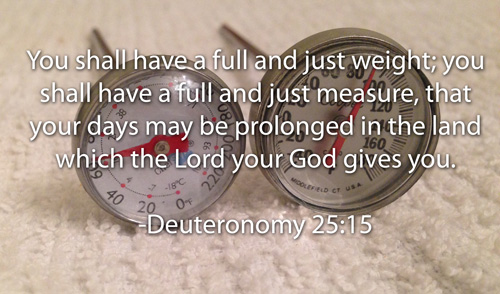