The mild Jesus has crept into the Church and we have started, by and far, to believe He lived as the mild-mannered nice guy. But that is a Jesus whom was rarely seen in the Gospels. It is true that many professing Christians rarely, if ever, read the Bible. They are left to their own assumptions: if Jesus is God, he must be all (and only) love, so we have a nice Jesus. Sadly, most modern Christians attend churches that have become weak in teaching, and so they portray Jesus in that way.

Those of us, however, who do spend time in the Scriptures, particularly the Gospels, will find a Jesus that is very hard on his critics. He is not the soft-spoken Jesus whom is looking to find the common ground with the other spiritual leaders. In his book, The Jesus You Can’t Ignore, John MacArthur takes us through a tour of the Gospels showing us the manifold places where Jesus is bold, loud, and confrontational. While he approached the sinners with love, healed the sick, forgave many sins, He also spent most of his earthly ministry battling the false religion of the Pharisees and Sadducees, casting the money changers out of the temple, and talking to people the culture would forbid Him from speaking with.

In this book, we get a detailed study of the importance of sound beliefs and doctrines. We learn when it is wrong to be Mr. Nice Guy, but how to correct people with love. MacArthur takes us through the teachings of the religious leaders in Jerusalem during His life on earth, the times He met with humble Pharisees more cordially, but also the times He lambasted them with the sermon on the Woes to the Pharisees. We learn about the times Jesus healed people on the Sabbath just to stir up the presuppositions about what is right and wrong on the Sabbath days. Jesus truly did challenge the religious leaders of His day when they were wrong about their teachings.

The book is tempered with a warning about not starting foolish disputes:

Now, we need to keep this in proper perspective. I’m not suggesting that every disagreement is an occasion for open combat, or even harsh words. Far from it. Many disagreements are so petter that it would be utterly unprofitable to engender strife over them.

But MacArthur agrees that sometimes disputes arise that need challenged:

But sometimes–especially when a vitally important biblical truth is under assault; when the souls of people are at stake; or (above all) when the gospel message is being mangled by false teachers–sometimes, it is simply wrong to let a contrary opinion be aired without any challenge or correction.

The book gives us insight into Jesus’s whole earthly ministry, but with a focus on the times He was specifically not gentle with his audience. We examine the two times He cleaned the usurious money changers out of the temple, the difficult teachings, and the various times He spoke in ways the Pharisees saw as blasphemous.

We also look at the ways the miracles and healing He performed on Sabbath days were specifically used to challenge the authority of the religious leaders. Jesus did not just perform miracles. He engaged his audience with numerous sermons that would have caused our modern crowd to chant, “Hey Hey, Ho Ho, Jesus Christ has Got to GO!” His sayings were hard, His parables were hard, and He was equally hard on hypocrites.

This book was a refreshing read in a day where the church tends to see Jesus as a self-help genie who wants to make everyone’s life go perfectly. The Jesus presented in The Jesus You Can’t Ignore, like the Jesus in the Gospels, is powerful, confrontational, and true. It will challenge modern presuppositions about Jesus and give you a perspective that is embraced by churches that are concerned with truth. 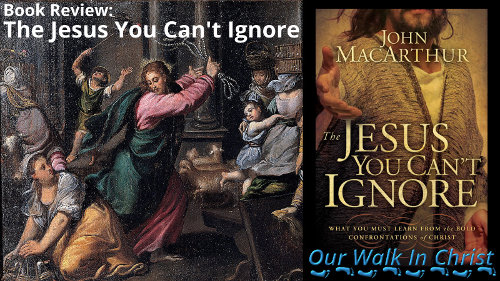