Today's post is a review of the book, Jesus, Lover of a Woman's Soul, by Erwin Lutzer and Rebecca Lutzer. Unquestionably today, there is a blurring of the sexes which has led to problems both in the church and out of the church with respect to biblical manhood and womanhood. The man has become a louse and the woman has begun to ‘wear the pants’.

Throughout time, in Jesus’ day as well as ours, the culmination has been movements to either separate the two, or to unite the two. In our day, the feminist movement is closely tied to the homosexual movement as well as paganism and Witchcraft. Dan Brown has certainly added fuel to the fire with the accusations that the church is a male-dominating, woman hating oppressor. Feminists blame the Bible for men dominating women. Jesus, Lover of a Woman's Soul calls for a return to the truth of the scripture. What is that truth? That men and women are both people in the eyes of God. They are both created in the image of God, they both have a distinct position in the kingdom. They are both loved by Jesus, partakers of the sacrifice that God has offered, and must stand alone, or with Jesus, in the final judgment day.

Rather than do a comprehensive study of manhood and womanhood in NT times as well as now, the Lutzers created a book targeted directly at women who are suffering, or have suffered, and the book seeks to lead them to the healing power of Jesus. The book focuses directly on the particular women that Jesus interacted with instead of a doctrine about what the standard should be. Don’t get me wrong, the doctrine is present, but somewhat obscured. The ladies covered are Mary Magdalene, the Samaritan woman at the well, the Canaanite woman who’s daughter was possessed, the Prostitute at Simons house, the woman with the 12 year hemorrhage, the young girl who died, the woman caught in the act of adultery, Martha, Mary (sister of Lazarus), and then they do a chapter of Mary Magdalene in response to The Divinci Code. I liked the book in the sense that is covered all the major women that people encounter in the Gospels with respect to Jesus’ ministry. It points out that woman are not second class citizens (the truth that the Bible teaches), and that they are important. The Lutzers, once again, lead us to a great resource for suffering people.

In almost every case, the Lutzers speculated on the life of the woman involved, and often portrayed her as a victim (sometimes that is justified, sometimes it is not). As such, it overemphasized the grace given the victim, but never mentions anything about the proposed perpetrator whether grace or wrath. It did not address the controversial issue of submission at all since it was not to be a comprehensive doctrine on the Biblical view of womanhood, but rather a book on helping a suffering person.

This book was a good read, and an interesting speculation at times. If you are a woman who is suffering, I would recommend it. Otherwise, it might be worth the time. Me personally, I did not get much out of it. I would like to pass it over to some ladies to see how they like it. 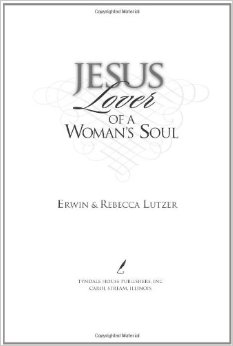