I read any Bible translations that I can read.  I am frequently asked for my comments on translations, so here are my thoughts on the New Century Version or NCV

The translation is a gender neutral which totally removes it from use for some people (I am referring to the people that think all gender-inclusive Bibles are evil). It does add to the language, but not nearly, or as bad, as the TNIV (Todays New International Version).

Some verses are TOTALLY translated wrong. I do not have a complete list, but a serious and common verse is this:

As you can see, the typical translations focus on the word being the transforming mediator, but the NCV, the person becomes the mediator. This is certainly not faithful to the text. There are several other verses that can be used.

There is not much that I really considered extraordinary. There are a few verses that I liked the wording for Romans 1:32 - They know God's law says that those who live like this should die. But they themselves not only continue to do these evil things, they applaud others who do them. Other than that, one can get some comedy relief from reading Ezekiel 12 and counting how many times he writes "Human"...I can almost see a fraternity drinking game spawn out of this one. Why does it say this so much? Because the term "Son of Man" is not gender neutral!

I don't quite think we should engage in book burning here, but when you get an NCV, you may not be getting the most faithful translation. It is of note that this translation is sold as many other names, most commonly, ICB, or the International Children's Bible (I think that there are 7 verses that are different between the two). (Image - Thomas Nelson, The Answer: Authentic Faith in an Uncertain World) 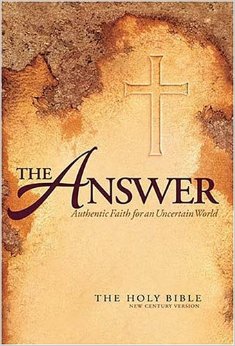