Only the Foolish are Saved

I have listened to many sermons over the years, and like many, I have my favorite pastors that I like to listen to on the radio or online. A trap that we may encounter is trying to find that one sermon or that one book to really help us to learn what we need to know to be a good Christian in this world.

I did this in college studying some very difficult subjects: I thought that my textbook was unclear so I would buy other books or other help manuals to really try to learn the material. Our human nature causes us to keep pushing and keep trying for more. This discontent is what feeds our consumerism and it is probably why coveting specifically mentioned in the Ten Commandments. The Greeks of Paul's day were always seeking better knowledge, a new philosophy, a new path to God. This is why they were so eager to place Paul in the Areopagus (Acts 17:16-21)! When Paul preached in Athens, he told the story of a Jew who was crucified and raised from the dead and that by faith in this risen Jesus, they could be saved. While some people heard the message and believed, others thought that it was total foolishness. Immediately after his time in Athens, Paul traveled to Corinth and then eventually sent them some letters. In the open chapter of 1 Corinthians, Paul writes:

For the Word of the Cross is foolishness to those who are perishing, but to us who are being saved it is the power of God (1 Corinthians 1:18).

Many people think themselves to be wise. Be it corporate or government leaders, other men and women of authority, or even us in our daily dealings with one another, we try to hide who we are and what we are doing. We hide it from the Lord and hide it from each other. But God, who sees our hearts and our motives,knows what we are up to. Paul quotes from Isaiah to say that God will destroy the wisdom of the wise, but that one line does not do the prophet justice. In his discourse about Jerusalem's faulty worship and clever schemes, Isaiah writes:

Because this people draw near with their words And honor Me with their lip service, But they remove their hearts far from Me, And their reverence for Me consists of tradition learned by rote, Therefore behold, I will once again deal marvelously with this people, wondrously marvelous; And the wisdom of their wise men will perish, And the discernment of their discerning men will be concealed. Woe to those who deeply hide their plans from the Lord, And whose deeds are done in a dark place, And they say, “Who sees us?” or “Who knows us?” You turn things around! Shall the potter be considered as equal with the clay, That what is made would say to its maker, “He did not make me”; Or what is formed say to him who formed it, “He has no understanding”? Isaiah 29:13-16

We need to watch out that we are not trying to cleverly plan out our ministry and try to devise a message so proven that people rely in the message and not on the Christ that is in the message. The Gospel is foolish and we are not doing the God of the universe a favor by trying to make the message modern and relevant. That is the modern day equivalent of using clever speech to persuade people to follow Jesus. Paul further writes to the Corinthians:

Where is the wise man? Where is the scribe? Where is the debater of this age? Has not God made foolish the wisdom of the world? For since in the wisdom of God the world through its wisdom did not come to know God, God was well-pleased through the foolishness of the message preached to save those who believe. For indeed Jews ask for signs and Greeks search for wisdom; but we preach Christ crucified, to Jews a stumbling block and to Gentiles foolishness, but to those who are the called, both Jews and Greeks, Christ the power of God and the wisdom of God. Because the foolishness of God is wiser than men, and the weakness of God is stronger than men (1 Corinthians 1:20-25).

Let us preach the Gospel of Jesus, through knowing Him and the Word. Let's not rely on the latest business strategies or marketing approaches, but live a life that brings honor to God and always be prepared to defend the reason for the hope that is within us. 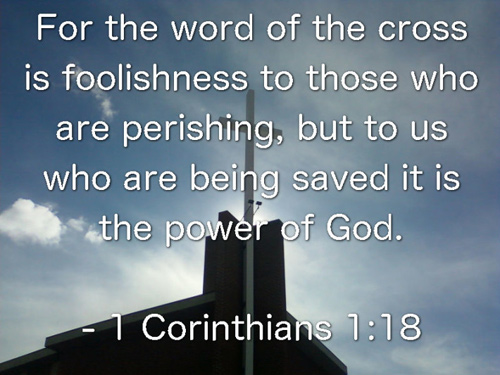