The Purpose of the Law

If you are familiar with the famous DISC profile, than you may well know that a high C personality loves rules and will do everything possible to follow them.  I want my accountant to be a high C personality because I know that none of the complicated IRS rules will be broken in my taxes; he will not knowingly let anything slip through the cracks in my tax preparation.  To contrast this, a high D personality will justify every broken law in order to better the cause he is working for.

I remember a story of a salesman that could not find a parking space on campus to meet with a professor, so he just pulled up into the grass somewhere and put a note on his dashboard that he was late for a meeting.  That is the very person that high C people shake their heads at in dismay for their behavior...but I heard the guy closed the sale! Laws are all around us and we interact with the law on a variety of different levels.  For some people, they know what the law says but fail to care.  To this person, the rules are just there to be broken, or in the case of the narcissist, the rules just do not apply to him.  To others, ignorance of the law renders it broken.  In a few cases, a practical living of life may result in breaking a law without realizing it, or without the reasonable ability to control it, such as running a red light to avoid being hit from behind.  Another consideration for a Christian is whether the law is from man or from God.  If the two laws conflict, the Christian is bound to obey God before man.

The first five books of the Bible are collectively referred to as The Mosaic Law because scattered throughout them are various examples of legal regulations prescribed by God for the Israelite people.  A Christian is correct to say that we may not be bound by these various rules and regulations.  Some of them were clearly written for the people at that time, but that does not mean we throw out all of the laws.  We need to understand that the laws in the Old Testament come to us in regards to three areas of society: Religious worship, civil interactions, and moral conduct.  When we are reading about a law in the Bible, we should think about which of these three areas the law is referencing in order to determine if it is binding or not.

The laws regarding religious worship are generally referred to as the ceremonial laws and they were rules and regulations on how to offer a sacrifice, what the priest had to wear, and under what conditions a person could come to the alter in order to make a sacrifice.  The beginning of the book of Leviticus is mostly ceremonial law.  The first five chapters outline the various offerings that were prescribed for the people to sacrifice to God.  The next two chapters outline the actual method by which the priest was commanded to offer the sacrifice delivered by the people.  These ceremonial laws governed the practice of their specific religion, but since we are under the sacrifice of Jesus Christ, these types of laws are not binding on us.  They are not pointless to our personal study, however, because the better we understand the ceremonial law, the better we understand what Christ actually accomplished for us on the cross.

All civilizations need laws governing how the people interact with one another and the Israelite people were no exception.  The civil laws are not as clearly defined in terms of location in the book, but are easy to spot by examining the context of the law.  For instance, Leviticus 14:33-57 describes what a person must do if mold is discovered in his house.  Clearly in America today, we do not need to have a priest come and measure the mold week after week.  This is an example of a civil law that was binding on their society at that time.  Note also that there is some overlap in the moral law and the civil law.  Although the civil law that applied to the Israelites is not binding on us today, understanding the attention to detail found in the law is helpful to understand the roots of our faith.

The moral law is the only aspect of the law that is still binding on us today.  These laws are reflective of the attributes of God and are identified as directives to the people that were not limited by the social structure or the religious practice.  The Ten Commandments are an example of the moral law.  These laws typically reflect purity or holiness such as the laws regarding the sanctity of human life and sexuality.  Each element of the moral law is reiterated in the New Testament indicating they are still binding on us today; the only exception being the keeping of the sabbath in the Ten Commandments is not binding on us based on scriptures that Paul writes as he is describing strong and weak consciences.

The Law for Today

Regarding the law, two errors have arisen in modern Christian circles and I have written on both of them extensively.  The first is believing that we are beyond all law because we are in Christ.  This false view is called antinomianism, meaning against or without the law.  To this person, since nothing can separate us from Christ, there is no need to worry about keeping any form of conduct.  This person is deceived into believing that since Christ covers all sin, He also covers all consequence for sin.  This is simply not the case.  We will be judged before Christ for what we do on earth as Christians.  Paul writes:

Therefore, being always of good courage, and knowing that while we are at home in the body we are absent from the Lord— for we walk by faith, not by sight— we are of good courage, I say, and prefer rather to be absent from the body and to be at home with the Lord. Therefore we also have as our ambition, whether at home or absent, to be pleasing to Him. For we must all appear before the judgment seat of Christ, so that each one may be recompensed for his deeds in the body, according to what he has done, whether good or bad (2 Corinthians 5:6-10).

We must live our life daily in faith, not assuming there is no penalty for sin committed under the blood of Christ. The second error, legalism, is to add to God's law in places where He has not spoken.  This error is common with people who do not want to progress in society (those who believed UPC's were the mark of Satan) or those that want to push a social agenda through Christian circles such as beginning to label habits like smoking or drinking a sin.  While it is true that these types of habits may well lead us stray, they are not specifically called sin in the Bible.  We must never add words where God was silent as if He said them.

The only solution that I see for living your life under Christ is to understand that the Bible does give us a prescribed manner of living.  We cannot afford to be ignorant of commands that the Bible gives us, thus we must read to understand how God calls us to live once we are Christians.  If you are not accustomed to reading scripture, there is no time like the present to start.  You can check your Bible for reading plans or check out this post for reading suggestions. Once you are reading the Bible regularly, pray to let the words transform your heart.  Sanctification is to process by which you begin to live more like Christ on earth.  It is a joint process between you actively reading and examining your life and God transforming you from the inside out.  Understand that the purpose of the law is to show us that we are sinners and in need of a savior, but accepting the savior does not nullify the need to live in a manner worthy of your calling:

Therefore I, the prisoner of the Lord, implore you to walk in a manner worthy of the calling with which you have been called, with all humility and gentleness, with patience, showing tolerance for one another in love, being diligent to preserve the unity of the Spirit in the bond of peace (Ephesians 4:1-3). 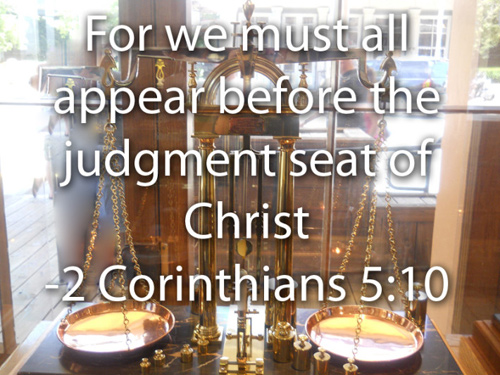