In 2012, a lawmaker privately funded a monument to the Ten Commandments erected on the grounds of the Oklahoma State Capitol.  Since then, there have been a few lawsuits questioning the legality of such a monument on grounds of separation of Church and State from Atheist groups as well as the ACLU.

While these lawsuits are mitigating, the Satanic Temple in New York has applied for a permit to erect a Satanic Statue next to the Ten Commandments.  But, in a surprising turn of events, the Church of Satan actually denounces the statue stating that it is "Crude" and "Pedophilic".  Interesting times that we find ourselves in.... So, what are the issues here?  I first saw this article a few months back, but was waiting to see some of the out falling on this issue to mention it.  On the one hand, we have the ACLU and other related groups trying to remove the Ten Commandments monument on the basis that religion should be on the State Capitol grounds.  But in case the monument can stay, the Satanic Temple would like equal space for their statue.  The Temple says, the statue will also have a functional purpose as a chair where people of all ages may sit on the lap of Satan for inspiration and contemplation (Catholic Online).  Of course the committee that approved the Ten Commandments indicated that the Judeo-Christian expression in the monument was part of the history and heritage of the state and city, but the statue of Satan does not actually have any historical merit.  They will not issue any approval or denial of this statue or any other religious expressions until after all lawsuits are completely mitigated. So where should we stand as Christians?  This one is a tough one.  Obviously, if we are fighting for free expression in the public arena, we also need to share space with any other religion, based on merit of history or any else any other wacko claims.  To clarify, we need to share space and have a discussion with Hindus, Jewish, Islamic, Mormons, etc.  But sadly, we must also share the space even with those seeking to mock our faith like the Pastafarians who 'believe' in the Flying Spaghetti Monster.  My view?  As long as Christians get the same space at the table, I am OK with it.  We need to be allowed in the discussion to the same extent that every one else is.  We need to push for what we believe in just like others push for what they believe in.  Let us just Preach the Gospel where we may to the people we encounter, but also live a life of extraordinary example not as hypocrites nor as Bible thumpers. Let us let Christ defend Himself through the Word.  He said, "I am the Way, the Truth, and the Life.  No one comes to the father except though me. (John 14:6)"  Sorry, this means that neither Satan will help us in the this life nor the next, nor will a flying bowl of pasta, though I can say that at least the pasta will give us calories for the day. What are your thoughts on all this? 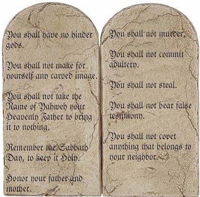