I just read in the news today that the owner of Sweetcakes in Oregon is closing down its business after a same-sex couple was refused service.  The state has a provision on the law books that prevents denial of private business services based on sexual orientation.  The debate has its supporters and opponents, with one side screaming 'INTOLERANCE!', though I am not sure why the other side is not doing the same.

Let me first mention the issue of the legal provision:  I think that a if a business opens up, they have a duty to fulfill the law of the jurisdiction as long as it does not conflict with Gods law.  If they do not like it, they need to seek the legal means of changing the law.  Does this particular law violate Gods commands?  I have been thinking about that, and while I think that it is a bad law, I can not find specific Biblical grounds to call it a violation of his law, though I think it comes perilously close.  On grounds of business, I think that it hurts free enterprise because it limits a persons ability to do business according to his conscience.  Now onto toleration.

Toleration is when we allow people to live, act, and believe as they wish even though we do not agree with it.  Toleration is also a two-sided street, a fact which I am not certain that some people believe or understand.  Please allow me to clarify.  As a Christian, I believe that the act of sex between same-gender people is wrong.  The Bible does say this, though it does not say to hate these people, or protest, or bully them.  Just that the action is wrong.  This is in the Old Testament and in the New Testament, thus it is something that is fundamental of the religious faith of Christianity.  As such, it is my belief that a Christian living the command of Christ to be Salt and Light to the community is not able, in pure conscience, to support homosexual unions.  But to the homosexual community, the Bible-believing people that do not support same-sex marriage are just plain intolerant.  They are so intolerant that they have to be rallied and protested again, harassed, the targets of death threats, and all this because they simply believe differently than the homosexual community does.  This is a double standard.  If you would like people to tolerate your views, you must also tolerate theirs.  We are Christians that would like to live our life as freely as you would like to live yours.

To the Christians out there, I give this admonition: The sin of homosexuality is truly a sin according to the Bible, but it is not the unpardonable sin.  Rather than focusing on the 'evil gay people', it would be better to love them and share with them the Gospel!  Let the Holy Spirit convict them of sin on Gods own timetable.  Our duty is to love all people regardless of their sin.  To the homosexuals out there, you are displaying intolerance if you scream, whine, cry, and throw a fit to or about anyone that does not agree with you.  I think you are wrong, you think I am wrong.  I believe that the intolerant one is the person that makes the most noise about it!

It is a shame that a company had to close down a business because of the intolerance of a homosexual lobby.  All the while, it is clear that their side was far more bigoted than the Christian business owners.  All the business said is to find another provider for your service.  They were not intolerant, they did not rally against the gay community to change their opinion, they just went back to work.  But the gay community calls them bigoted as a point-of-fact descriptive on an article from a pro-homosexual news site, and was clearly the side guilty of hate-based literature. Stop being intolerant! 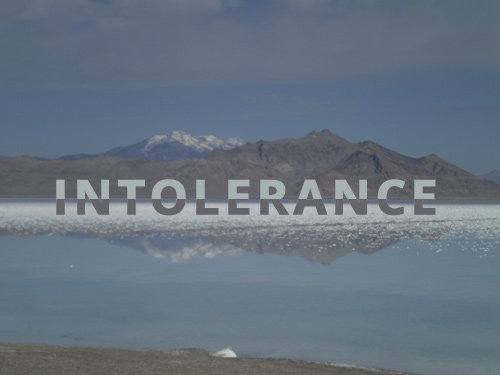