Give Your Money...Give Your Life

Once again a book crosses my path that made me think a little bit, and even reflect on my past, contemplate my present, and plan my future.  I read a book on money!  I have read the Christian argument for giving from every possible angle in the Christian circles.  Some people will quote lots of Old Testament passages like Malachi 3:8-12 and other related ones and say that God absolutely commands that you give 10% of your income or else you may not even be a Christian.  Some people say that giving is not even required to live a Christian life.  Like most other doctrines the truth lies somewhere in between these two poles.

Before I get into the specific book, I want to outline briefly what I believe the key doctrine of giving actually is.  We first note that the ‘tithe’ arises in the Bible as early as Abram giving 10% of the spoils of war to Melchizedek, king of Salem, Priest of the Most High God (Genesis 14:17-24).  Of course there is not any other reference of Abraham giving a tenth of all of his possessions or earnings to God.  We notice that sacrifices are as early as Cain and Able, but no percentages are given (Genesis 4:3-5).  Jacob offered God ten percent of his earnings IF God would be with him (Genesis 28:20-22).  I would not derive a mandatory ten percent giving from these.

Next, we have the Levitcal Law.  The law mandated to give certain amounts at specific times which amounted to about 23% of increase from the land to be given to the priests, but understand that these were made to the governmental concerns of the country.  Since I could write an entire article just on this topic, I would rather refer to John MacArthur’s advice on this matter here.  It all boils down to all governmental giving is mandatory while all giving to God is voluntary.

The chief controversy is in the fact that giving to God is always voluntary, but always leads to blessing.  I am not preaching a health and wealth gospel, but rather, the truth that God is not mocked.  As you sow, so shall you reap!  The best New Testament concept on giving comes from the Apostle Paul in 2 Corinthians 9:6-8:

Now this I say, he who sows sparingly will also reap sparingly, and he who sows bountifully will also reap bountifully. 7 Each one must do just as he has purposed in his heart, not grudgingly or under compulsion, for God loves a cheerful giver. 8 And God is able to make all grace abound to you, so that always having all sufficiency in everything, you may have an abundance for every good deed;

God blesses the cheerful giver, but we have too many churches these days that are trying to mandate giving.  I was even in a church a few years ago where the pastor said that “The Bible absolutely commands that you give ten percent of your income to the church.”  This was right before he passed the offering plates.  Obviously, this is not taught in the scriptures.  But giving of money is not the only type of giving; there is so much more at stake here.

The book, The Genius of Generosity, by Chip Ingram is a great book that covers the concept of giving, including what more is at stake.  Chip is able to gently discuss this topic without the legalism that is so common in the midst this discussion.  Chip starts by outlining a meeting with an elder in the church who was a very wealthy man named John.  John did not have the chance to meet the needs of people because of his demanding schedule as a partner in a firm, but he was able to give a large sum of money to Chip to use to fill needs that Chip saw in the course of daily ministry. Chip learned some valuable lessons from this arrangement, first, that all of our possessions actually belong to someone else, namely God.  By giving, we grow closer to God and to other people.

Far more than money, God calls us to be a steward in all areas of our life.  Money is the best way to illustrate the point because it is important to us as people.  We are a steward of our time.  Do you use yours in a way that honors God, or do you waste large chunks of time?  Even the house, the car, the computer, and all of own possessions, they all belong to God.  Are you using your possessions in a way that honors him?  All of these things are God’s way of testing us.  To illustrate this point, Jesus tells a parable about the ten talents in Matthew 25:14-30.  God is testing us with the small things to see if we can be trusted with the great things he has in store for our future.  Are you being a good and faithful servant?

There is a correct saying, “You can’t out-give God”.  God is the ultimate giver, and He gives to those that give (Revelation 22:12).  He looks at the test results of the hearts and minds of His children and chooses to bless the lives of the people that give the most.  Of note, God does not necessarily bless with the same currency.  You may give a lot of money, and never receive a penny back, but he will bless you in some way on the earth, and also, He will bless you greatly in Heaven.

The last chapter of the book answers the question of how God measures generosity.  Chip indicates that God measures the generosity of the gift by the amount of sacrifice that is produced.  Does your giving impact your lifestyle?  Does the money you give impact your personal spending?  Do your time and possession gifts get in the way of your selfishness?  That is what God is looking at.

Before I started to talk about this book, I said that the stakes are more than money.  That is so true, even in my own life.  Before I moved to Wyoming, I was a teacher for Sunday School, a youth group, a boys club, and I was also a member in several small groups, and a mentor in Big Brothers / Big Sisters in addition to helping younger recruits in the graduate program at school.  I can say that I sacrificed a lot of my time.  I did not have much money to give at that time as I was a graduate student, but my giving God the best portion of my time gave me more friends, family and blessings than I ever thought was possible for such a person as myself.  This book covers the concepts of giving from a Godly perspective.  Have a look at this or some of my other favorite Chip Ingram resources. 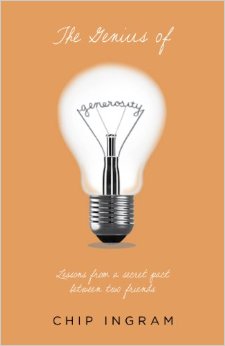